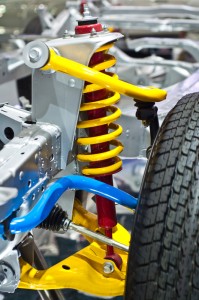 We’ve just all encountered cartoons with characters on Pogo sticks. Now visualize your car with a Pogo stick at each wheel. You drive down the road and your tires hit bumps or potholes. Almost every bump, the spring compresses and then rebounds, conveying the corner of your car exploding upwards. Launching that amount of weight upwards literally lifts the tire off the pavement, as well as shaking the fillings right out of your teeth.

Worse than the initial rebound however, are the follow-up rebounds. For the reason that as soon as the car approaches the peak of its first rebound, it commences its descent back onto the spring, compressing it a second time period. This approach cycle of spring compression and rebound extends until such time as the energy of the bump is dissipated. This is certainly designated as spring oscillation.

Meaning the first job of a shock is to diminish or dismiss spring oscillation. Fabricated just like a doctor’s syringe, shock absorbers incorporate a plunger, a cylinder, and a non-compressible liquid. The bottom of the shock absorber holds the fluid filled cylinder and is associated with the lower control arm of your car, forcing it to consider the first hit from the bump.

The top end of the shock absorber is the plunger and is attached to the body of your car. As the plunger gets pushed in, it forces fluid out of the cylinder through a small valve, hindering the rate of compression of the spring. Whenever the spring begins its rebound, the plunger sucks the fluid back into the cylinder. The valve in the shock permits the fluid to flow out of the cylinder more quickly than it can get sucked back in. That’s how a shock absorber works effectively to control spring oscillation, or rebound.

Over tons miles, the seals around the piston and the valve itself commence to wear. Damaged piston seals permit fluid to bypass the small opening in the valve. Contrary, the fluid actually flows around the piston, provides far less resistance to spring compression. Absolute worn valves permits way too much spring compression and enable spring rebound to occur too rapidly. The result? Spring oscillations.